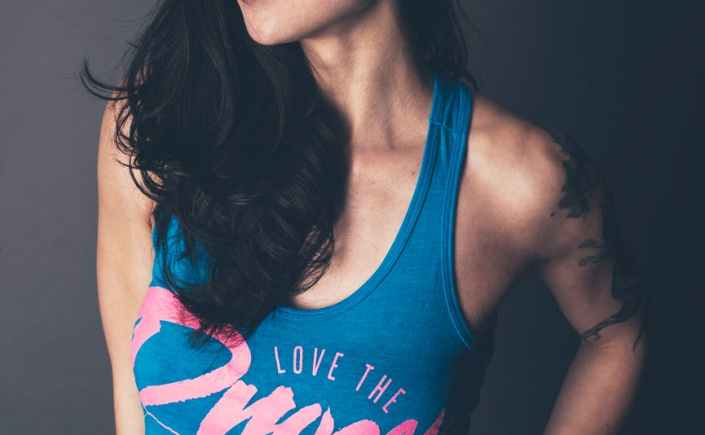 I hadn’t really acted on the impulses before. Ignored them. Buried them deep. But that only works for so long…

I‘m a runner: jogging’s my poison. And the way I look at it, if you’re going to run, you need the gear – when you look good, you feel good. You run better. I’ve half a wardrobe of men’s tight leggings, tank tops, hi-vis versions for winter. I never scrimp on the right gear.

So I’m out jogging. And on this day I’m tying my lace on a quiet pathway that loops around a leafy residential area in suburbia. Fantastic sunny evening. Traffic had died down and a few birds tweeting in the hedges.

Just then I noticed the deep aroma of honeysuckle. Totally hate gardening but appreciate my scented shrubs. This particular honeysuckle was just inside a low white picket fence to my right. When I finished fixing the lace I moved to get a proper sniff.

I pushed my nose into the nearest flower and closing my eyes, breathed deep. I guess I was a little too wrapped up in the smell because when I opened my eyes a lady was taking clothes off the line in the garden. She was about 25, shiny black hair, great figure. I think I recognised her, had probably passed her running. She’d already spotted me.

“The honeysuckles’ gorgeous this time of year right?!” She continued filling her basket. Lycra leggings and figure hugging sports top. My kind of girl.

“Yes, beautiful. I hope you don’t mind.” At that moment my eyes glanced to the clothes she was delicately placing in the basket: bra’s, knickers, suspenders of every colour imaginable. Nothing else. Just frilly underwear. And me leaning half way over her fence sniffing a bush… It was slightly surreal. My face must have given me away because she smiled and went on,

“Of course I don’t mind. Stop anytime you like.” She watched me closely, a sparkle in her eye, all the while filling the basket. “Anytime,” she added as she gently unpegged and folded the items. I could have pulled up a chair just to watch her bend that body. In moments like this you can either melt away with awkwardness or you can splutter

“Great evening for a run,” and I kind of gestured to the path. I know, not exactly chat up line of the century.

“Great evening for a lot of things,” and she winked before bending down, real slowly and deliberately, to pick up the clothes basket. That put my mind into meltdown and the best I could manage was to splutter some nicety before starting off in a slow jog.

Talk about being torn. Part of me wanted to loop back past that garden  that evening. I wanted to run past that garden seven evenings a week. Then sensible me, the embarrassed part. The part that said, “play it cool and don’t be a stalker,” wanted to avoid that clothes line. In the end I did neither and continued my regular run. Without pit stops at her fence. No way I was going to be accused of being a peeping Tom by the local tease. So ce sera, sera.

But I have to admit, red blooded man and all that I am, my mind couldn’t stop. My mind would drift off into a lingerie fantasy. Sometimes I’d wake up from a dream in which I was buried under mounds of silky bras, her laughing softly in my ear.

Or I’d day dream that she was pushing a line full of lingerie down towards me. But always just out of reach. Or I’d imagine her naked. Walking towards me with a clothes hanger on each outstretched arm. Each hanger covered in the smoothest laciest underwear you could imagine. All those lush colours. Something about lingerie and the crispness of the colours.

That’s not exactly how things worked out.

Saturday evening. Picked up the phone to check the football results. Definitely wasn’t expecting a message on Tinder. The notifications were on silent so never even heard the message arrive. It had been there an hour.

Opened the message proper. Looked at her profile. Large dark sunglasses, a red cap, and hand covering a large part of her lower face. Lush rep lipstick. But behind her. Unmistakable. The clothes line. And then a single line on the “About me” part. “Clothes Hanging Engineer…”

Just then another message popped up. “Why you so shy running boy?” Puzzled emoji.

“Hi Jen!” I replied. “How you keeping?” Smiling face and running man emoji from me.

“I’m good…..” Jen is typing…. There was a delay of thirty seconds. I was tempted to butt in and write something but she got there before me.

“Well actually Dave…. its a little complicated… but it you don’t mind that…” Wink emoji.

We played message tennis for the evening but it went like this. She didn’t normally contact guys but was lonely. She had a boyfriend. They’d bought a house together. He was seeing someone else. Things had turned sour between them. Yada yada yada. I’d had a few beers and was braver than I would be sober. Definately braver than I was standing at her back fence so eventually I put it to her straight, “So, you’re just looking for a bit of fun…?”

Me grinning. “Okay. The lady gets what the lady wants…”

“What have you in mind?” I was salivating on the couch… Jen is typing….

“Thursday evening…” Then thinking emoji. Delay. “Around 9….” and smiling emoji… “I’ll hang a little green lacy set on the line…” Another knickers icon.

Saturday to Thursday is a long time in a single mans life. Especially when he’s on a promise. My mind was unstoppable. The messages kept coming from Jen. I had more of those dreams and a green g string started to appear everywhere I looked. Thank God for cold showers.

Thursday evening and as I approached the garden I could see Jen’s little dark green set bobbing in the breeze. I immediately slowed my jog. Three bits of lingerie, knickers, bra, suspenders. They were real dark green, slight sparkle off the straps. Incredible.

A little gate at the bottom of the garden path was propped open and I stepped through. I tried to appear relaxed but it was hard with the adrenaline pumping. Then a dormer window popped open in the roof – Jen pushed it up. Her arms were bare, just a strap on her shoulders. She smiled down, motioning me up with her finger before she stepped back from the window.

Heart banging. And that’s when the strange impulse hit me hard. Like my brain flashed into technicolour or something weird. I’d had urges before, but always associated them with the girls, with lust for the ladies. And honestly, a huge part of me knew I wanted to go into that house and up the stairs. What man wouldn’t? But I knew there was something I wanted more than her. And I wasn’t prepared to wait any longer.

My mind was already decided. I turned to the clothes line and hurriedly gathered the lingerie up into a ball. I put them up under my top and vaulted over the fence, never once looking back.

I don’t remember running home or bolting inside and locking the door. I just remember euphoria rushing through my veins and the touch of the lingerie against my skin.