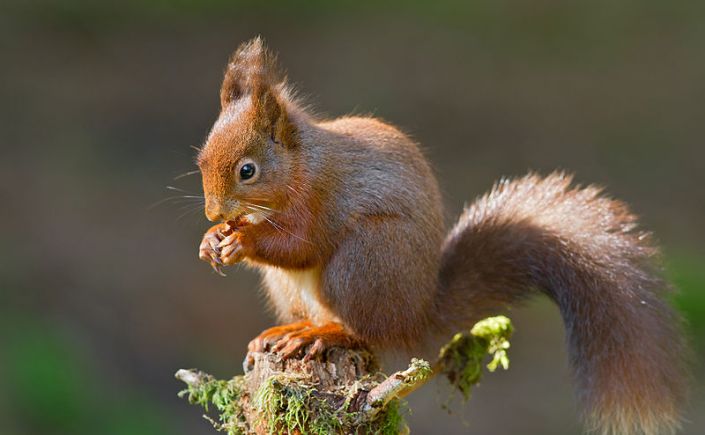 Keep your wits about you the next time you wander through Rossmore Park, Monaghan, Ireland, and you might just spot one of Ireland’s most cherished mammals. Yes, the Red Squirrel is back with a vengeance in the forests of Ireland. So what has caused the reversal of fortune in the red’s numbers and why is the once dominant Grey Squirrel in retreat?

The answer lies in the fate of another mammal – the Pine Marten. Destruction of their habitat (in the 19th and 20th century) combined with widespread hunting and poisoning put them on the endangered list. The Pine Marten looked destined to join the ranks of Ireland’s extinct species.

The Grey Squirrel for its part is a non-native species and as the Pine Marten disappeared the Grey was unrestrained, without a predator to check its numbers. The Grey spread initially from Castle Forbes in Longford (where six pairs were released for aesthetic reasons in 1911). From here the American native quickly spread in all directions. And unfortunately the Red Squirrel became a victim of the Greys territorial expansion. It found itself unable to compete with the fast breeding Grey and the Reds breeding rates dropped rapidly. The Grey also carries a disease which has an 80% mortality rate for Reds that contract it. And so forest by forest the Red Squirrel edged closer to joining the extinction list.

Thankfully there was a turning point for the Pine Marten in 1976 when legal protection
was introduced by Dáil Éireann. Since then numbers slowly increased and the Pine  Marten began spreading from their remaining refuge in the West of Ireland across the country. With the future of the Pine Marten secured, the time was right for a Red Squirrel revival.

The return of the Pine Marten signalled the end of the Grey’s expansion. Grey squirrels evolved in an environment free from Pine Martens and so their heavier, slower attributes makes them vulnerable to attack. Red Squirrels are small and light enough to get to the ends of the branches, where the Martens can’t follow. However some suggest the Greys vulnerability is not only physical but also psychological. The Pine Martens seem to scare the Grey into retreat.

NO DEFENCES AGAINST MARTENS

In simple terms it seems that since the grey squirrels have no defences against martens, they have had to spend a disproportionate amount of their time trying to avoid them – time that would otherwise be spent eating and breeding. And hence, the remarkable turnaround in the Reds fortunes.

Unfortunately there are many other examples of ecosystems thrown into chaos by human tinkering. The destruction of the otter population in Europe has given the American Mink a clean run at many other species such as water vole and ground nesting birds. Mink has been farmed in Ireland for its fur and their escape into the wild threatens many already weakened species. But for now, we should enjoy the simple pleasure of seeing the Red Squirrel back where they belong, in the woods and forests of Ireland.

This article was published in the Northern Standard as part of the Sustainability Matters column which is collated by Transition Monaghan.

Since writing this article I’ve heard of red squirrel sightings across Co Monaghan including at Hilton Park Scotshouse and in Dartrey Forest Rockcorry!

2 thoughts on “The Red Revolution”