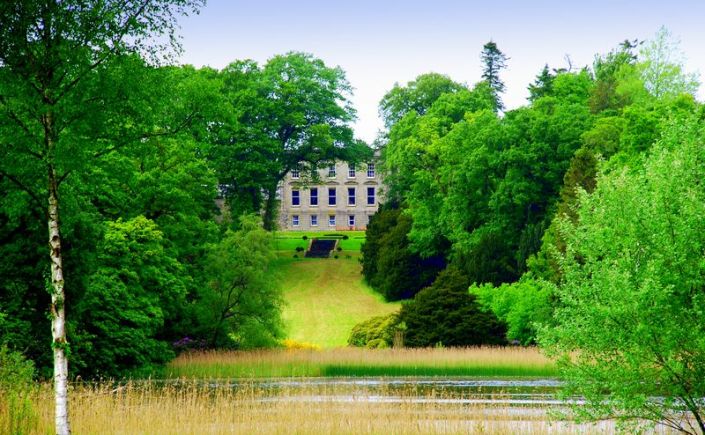 Dermot McNally spoke to the Madden family of Hilton Park, Monaghan about their role in putting sustainability at the heart of one of Ireland’s most luxurious guesthouses.

Sustainability is an often abused term but the nine generations of the Madden family at Hilton Park have long been pioneers of sensitive and progressive farm and forestry management techniques. This tradition began in 1731 when Samuel Madden (co-founder of the Royal Dublin Society) promoted the idea of financially rewarding outstanding initiatives, hence the nickname “Premium Madden”! So it’s little surprise that the Hilton woodlands at Scotshouse, Co Monaghan were honoured with the RDS Multi-Purpose Forestry Award 2018.

The award is aimed at forests that are developing and enriching habitats through natural and environmentally sensitive methods. Judges took into account the planning and management of the area, ecological awareness, social benefit, silviculture methods, control of grazing animals and invasive species, as well as sensitive felling and thinning. Fred Madden and his father Johnny liaise with forester Sean McGinnis of EcoPlan to ensure that both biodiversity and timber value are enhanced with each intervention in a method referred to as Continuous Cover Forestry (CCF) or sometimes as the close to nature approach. Indeed Fred, the latest custodian of the historic country house and grounds, has brought a renewed enthusiasm into the enrichment of Hilton by planting fifty additional acres of woodland in recent times.

Long term planning is behind the management approach at Hilton and the woodland estate has a diverse range of species. Approximately one third of the overall area is made up of conifer such as Sitka and Norway Spruce. These are blended into rich woodlands of oak, beech, alder, birch, fir and many other varieties all of which help to create a ramblers paradise. With different stands of trees reaching maturity at different periods, the woodland generates a steady return which goes somewhat to helping to maintain the grounds and house.

Knowledge handed down through the generations of the Madden family inform decisions made today. Area’s of the woods where soils are shallow or that have been prone to wind blow can be tended and planned accordingly. A gradual extraction of timber (group fell) as well as the planting and natural regeneration of saplings ensures that the woodlands constantly remain pristine. And the quality of the timber produced is second to none: when parts of the roof of Windsor Palace were destroyed by fire in the 1980’s, oak from Hilton was sought out to aid in the rebuilding works.

But if CCF is so good why doesn’t everyone follow the Hilton methodology? Firstly scale is critical. Around 250 acres are under woodland at Hilton and so the enormous fixed expense in mobilising timber extraction equipment every year or two to service the woods is justified. Few privately owned woodlands exceed 30 acres and small forest owners struggle to justify such regular financial outlay. In addition natural regeneration (a key component of CCF) is difficult on some sites and necessitates manual planting and spot tending. This is expensive when not carried out systematically.

And if biodiversity wasn’t valued by the Madden family it would be a very different forest – conifer stands are generally three times more financially productive than the broad leaf areas which dominate at Hilton. The Irish market for timbers such as oak or beech is poor and exporting bulky timber logs rarely makes sense. So with these inherent challenges it’s sadly inevitable that most newly planted small to medium plantations are dominated by 75% conifer (such as Sitka Spruce) managed by clear-fell. It’s simpler and more profitable: investors can hope to achieve a modest 5% on well managed forestry ventures.

To conclude then it’s fair to say that the Madden family are going far beyond mere lip service to sustainability: their woodlands are home to every imaginable flora and fauna including rare species. And for those who fancy the luxury offered by a stay at Hilton Park, fresh and finely served home grown produce play a key role in the cuisine Fred and Joanna serve up to their guests. Ingredients are derived from the kitchen garden, herb garden and indeed foraged from around the estate.

So be it for a stroll around the wonderful woodlands or to enjoy the luxurious accommodation and the best of Irish hospitality, put Hilton Park on your must visit destinations. Fred and Joanna can be contacted at www.hiltonpark.ie