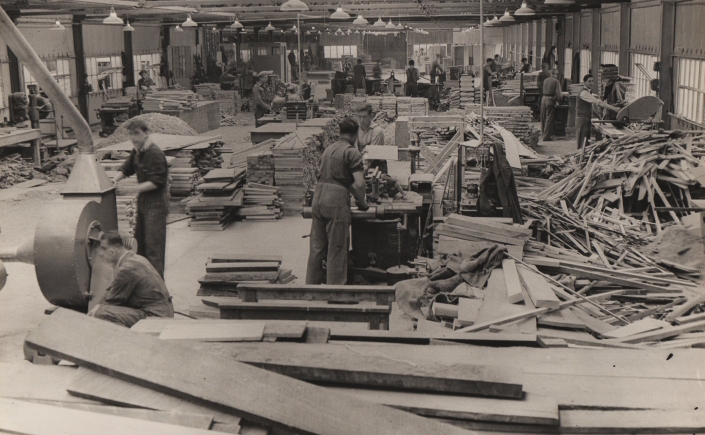 The Ill Wind of Borders Past…

Diarmaid Ferriter’s recent book, “The Border” reminds us of the damage that trade and frontier instability can cause in a small country like ours. Nonetheless it’s enlightening to note that the same ill wind brought some benefits south of the Border.

Early May 1925 and Mr Thomas McDonagh, a businessman and Quaker from Co Armagh, had just completed a deal to rent a building in Monaghan Town. The letting agent of the day mischievously spread the rumour that McDonagh was planning the first congregation of “Friends” in the county. But when woodworking machinery and timber arrived, it became apparent that the project had little to do with eternal life and everything to do with the root of all evil. Money.

“Burn everything English except their coal,” is a well quoted slogan from the trade war in the 1930’s but there were earlier blows exchanged. The 1924 and 1925 budgets passed by the Cumann na nGaedheal Government saw protectionist tariffs of up to 33% levied on a range of imported goods from the UK, among them furniture. And so McDonagh, a successful furniture manufacturer operating out of Richhill, Co Armagh, suddenly found himself in an unexpected quandary. Manufacture his products south of the new border to avoid tariffs, or lose the majority of his trade customers.

McDonagh had grown his manufacturing trade for twenty years by following the line of the Great Northern Railway which ran through Richhill towards Armagh, into Monaghan and connecting on to Cavan and Leitrim. The iron horse was the preferred method for shipping heavy goods but McDonagh’s pragmatic expansion strategy left him severely exposed to partition and the new tariffs.

It’s unthinkable in the modern world but within two weeks of the announcement of the tariff he had opened a new factory in Monaghan. He also made the progressive decision to task his oldest daughter Annie to direct the operation. Monaghan had a Catholic majority but was dominated by Protestant businessman so McDonagh’s decision to send staff from across the religious spectrum to accompany Annie was certainly prudent. However prudence was never his motivation. He always espoused a non-sectarian outlook. When Lady Leslie of Glaslough brought Belgian Catholic refugees to Monaghan during World War 1, it was McDonagh of Richhill who offered a gifted cabinet maker among them both accommodation and paid employment in his factory.

All the risk in opening a factory in Monaghan paid off: by 1926 it was reported in the local press that the business was thriving and now required a larger premises which could accommodate 60 workers. The ill wind of partition and tariffs had sown a seed in Monaghan.

But it wasn’t all smooth running for the McDonagh family according to Andy Chapman, son of Annie McDonagh. For a start, they struggled to manage both the Monaghan and Richhill factories simultaneously. Strikes and labour discontent made production unreliable and retaining the best staff in these circumstances was problematic. John Coyle, one of the Richhill men struck out with local man Noble Kerr. Others followed. By the mid 1930’s McDonagh was competing against several of his own proteges. A malicious fire in 1939 at the Monaghan factory was the end of the McDonagh story south of the border but the family continue manufacturing in Armagh to this day.

The partnership between John Coyle and Noble Kerr was short lived but each continued the trade alone. Their firms in turn spun out an incredible number of new independent start ups (in both cabinet and upholstery manufacturer) including McElroy’s of Castleblayney, Caddens, Sherry Bros of Scotstown who together with McNally and Finlay in Monaghan Town formed Rossmore Furniture, and McCreadys of Emyvale, later Gola/Woodland Products. Insofar as I can ascertain the list of furniture manufacturers who operated or who indeed still operate (with a lineage to McDonagh) would fill the article but the gist is clear.

The workshops were spread between Emyvale, Scotstown, Castleblayney and Monaghan Town with the majority of the furniture destined for England. Direct employment in furniture peaked at over 1000 in the 1980’s and it still remains a formidable indigenous. employer. Furthermore Monaghan’s reputation as a hub of woodworking excellence played a part in the IDA recommendation in 1965 to the Tyrone born McCaughey brothers to consider Monaghan for their new American inspired timber buildings. The result was called IJM (Irish Joinery Monaghan) and it gave birth to the modern Timber Frame house in Ireland. Success has a habit of breeding success and a branch of the McCaughey family went on to establish Century Homes, (now Kingspan Century) and the recently hailed Entreka.

Nowadays local wits overlook McDonagh the Quaker and instead prefer to attribute Monaghan’s reputed entrepreneurial prowess to Protestant work ethics and Catholic accountants. However McDonagh’s story shouldn’t be forgotten as it reminds us that no matter what barriers are placed in the way of the people of the border, they can and will find opportunity in crisis.