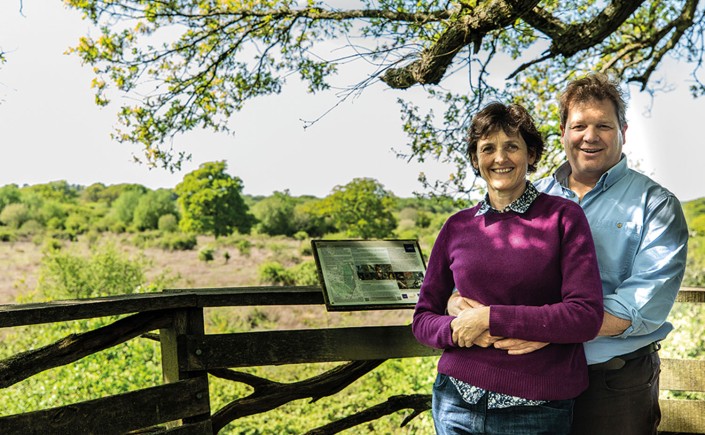 Knepp Castle Estate is a 3500 acre of below average farmland in West Sussex which has been reinvented over the last decades. In her recent book, “Wilding: The Return of Nature to a British Farm”, farm owner Isabella Tree details how they were unprofitable for 17 years in dairy and cereal production. Determined to change their fortunes the family turned over the entire farm to free-roaming herds of old English longhorn cattle, pigs, ponies and deer as part of a rewilding project. It was a daring leap of faith because without the continued use of herbicides and pesticides, challenges arose in the form of weed infestations and unsightly areas. However in time nature seemed to find an equilibrium without costly or toxic human interference.

Nowadays the animals at Knepp Castle Estate roam in herds where they want, stopping to wallow in streams and meadows when they choose. Gone are the monocultures of rye grasses and now the animal diet is varied and includes wildflowers, a range of native grasses and everything in between. The way the animals graze, puddle and trample stimulates vegetation in different ways which is giving small mammals and birds an opportunity to thrive.

Animals in conventional farming are often given anti-worming agents and occasionally antibiotics which all returns to the soil through animal dung and urine. Isabella highlights the fact that their system avoids routine treatments and produces a more natural dung / urine. This and the natural growth of all sorts of vegetation which wouldn’t normally be allowed to flourish on a conventional farm, in turn feeds earthworms, bacteria, fungi and invertebrates such as dung beetles. This plays a vital part in incorporating the manure down into the living soil below. The key Isabella claims, is to be organic, avoid tilling the earth and keep animal numbers low.

So where their soils were once degraded after decades of ploughing and chemicals they are now returning to full vitality. Isabella lists a range of indicators of success: fruiting fungi and orchids appearing proving that subterranean networks of mycorrhizal fungi are spreading. There are 19 types of earthworm active in their soils and 23 species of dung beetle can be counted in a single cow pat, including one which hadn’t been seen in Sussex for 5 decades. With a knock on growth in creepy crawlies the range of birds has increased. And incredibly, the rooting of pigs has helped the native sallow tree (goat willow) to establish which in turn has attracted the the biggest colony of purple emperors butterflies in Britain. The purple emperor lays it’s eggs on sallow leaves. 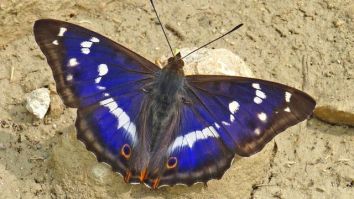 So how does this create income for the family? Meat Sales of £120,000 (based on 75 tonnes of live weight sold with just .3 livestock units grazed per hectare!! For comparison an Irish dairy farm often has 2.5 livestock units (or dairy cows) per hectare or almost 1 cow per acre), Environmental Stewardship Grants of £191,000, Rent from tourism and cottages of £440,000 and rent from converted agricultural buildings of £550,000. The tough breeds of animal farmed can live outdoor all year round and rarely require supplemental feeding or trips to the vet. And while methane production from livestock is still problematic in terms of climate change, the Rowett Institute in Aberdeen has, according to Isabella, shown that natural varied diet leads to reduced methane levels. That said, Isabella agrees that we should eat less meat and she advocates an end to polluting and intensive forms of grain-fed meat production.

Many large landowners have visited Knepp Estate to learn about the process but Isabella is under no illusions about their motivation. She claims that most are motivated as much by the threat of the loss of agricultural subsidies due to Brexit as by a desire to protect nature.

Despite the clear progress at Knepp Castle Estate, regenerative agriculture at Knepp is being attacked on all sides! There are some within the vegan movement who claim similar environmental benefits could be achieved without the slaughter of sentient animals. The UK National Farmers Union have dismissed the project as a waste of productive farmland and suitable for wealthy hobbyists only: the Knepp Castle Estate returned meat sales of £34 / acre which certainly wouldn’t provide an income on the average Irish farm. Others knock the lack of apex predators – i.e, they think the farm isn’t wild enough and needs wolves and bears! You certainly can’t keep everyone happy. In response, Isabella Tree challenges critics of their style of regenerative farming to look more honestly at where their own foods are coming from. Isabella claims that meat, cereal and vegetable production that rely on soil damaging chemicals are more damaging than her low intensity meat production. Decide for yourself. For more information see www.knepp.co.uk